So, you want to know through astrology who is going to be the next US president? So do I! As an astrologer, I am going to look into it with my favourite tool: the Bazi or 4 Pillars of destiny. That is, a form of Chinese astrology through the system of the 5 Elements. It can give great predictions if you know how to look deeply into it. And I should know at this is my work…Let’s look at what the planets have in store for our candidates then. My analysis is, you’ll see, quite different from what most astrologers using this system foresee…

I hope that you are all doing well and like French people do, eat enough garlic to allow for natural « social distancing ». Whatever. Lockdowns are coming back everywhere and the end of the year look as joyful as the beginning, with what one could seriously mistake for a systemic destruction of the working class worldwide under the guise of “protection”. Did I say something? Nope, nothing at all…At least if I did, it was all in my yearly predictions for 2020 here:

World predictions for 2020 year of the Metal Rat. Part 1: exploration

World predictions for 2020 year of the Metal Rat. Part 2: integration

But wait, the shit fest is not over: we have the plat de resistance with the US Election. And again, like in 2016, what a choice really. I’m not going to take side, it’s all a con game and an illusion of choice – I’m siding with George Carlin on that one. https://www.youtube.com/watch?v=qxsQ7jJJcEA

Remember in reading this article that I am:

So remember folks: don’t shoot the messenger. I have no stake in it, outside of using the wonderful tool that is astrology to see patterns, predictions and outcomes. And I won’t hold back commenting on those two guys, because where would be the fun in holding back?

A note on astrology and the Bazi system

For those of you not familiar with the Bazi. It is a system that creates a “Pillar” made of the 5 Elements and of one of the Chinese animals for the year, month, day and time of birth. The relations between the Elements on top in the Stems, and the animals below in the branch gives information on personality and destiny. The placement of each Pillar also relates to different aspect of one’s life, such as career, children, money and love. The chart evolves over time and interact with periods know as the Luck Pillar and each year. In this form of astrology, we talk about the Element in the day of birth to define the chart.

One word of caution here. Astrology is not the whole life, and is actually part of the traditional 3 realms or 3 lucks: Heaven, Human and Earth. We are looking here at the Heaven realm: the tendencies of fate for each candidate. Their free will and karma (Human) and the places where they live and work (Earth) also have a major influence. So, the whole destiny of a person and a country is NOT written only in astrology. We see here a weather forecast, not the entire picture. Keep that in mind…

Joe Biden’s Chinese astrology for the US Election.

First, let’s get something out of the way. We can agree that the democrats have picked up a very old, creepy and uncharismatic candidate. It’s almost as if they wanted to lose and remain in the opposition, and stronger in congress where the real power is…In fact, there are several scenarios we need to consider here with the puzzling choice of Biden.

Regardless of the scenario…Does Joe Biden has a chance to be elected 46th president of the US? Here is a closer look at Joe Biden’s Bazi, his chart in Chinese astrology. 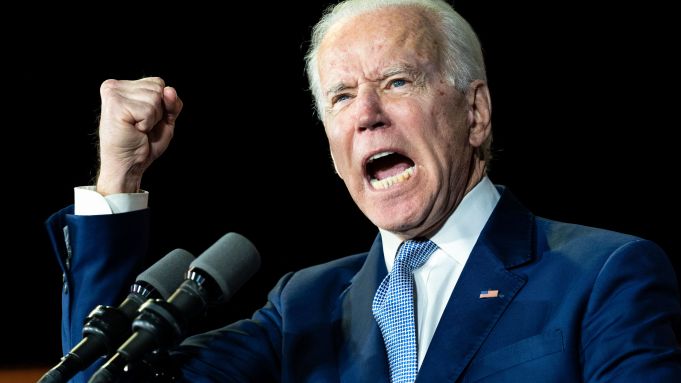 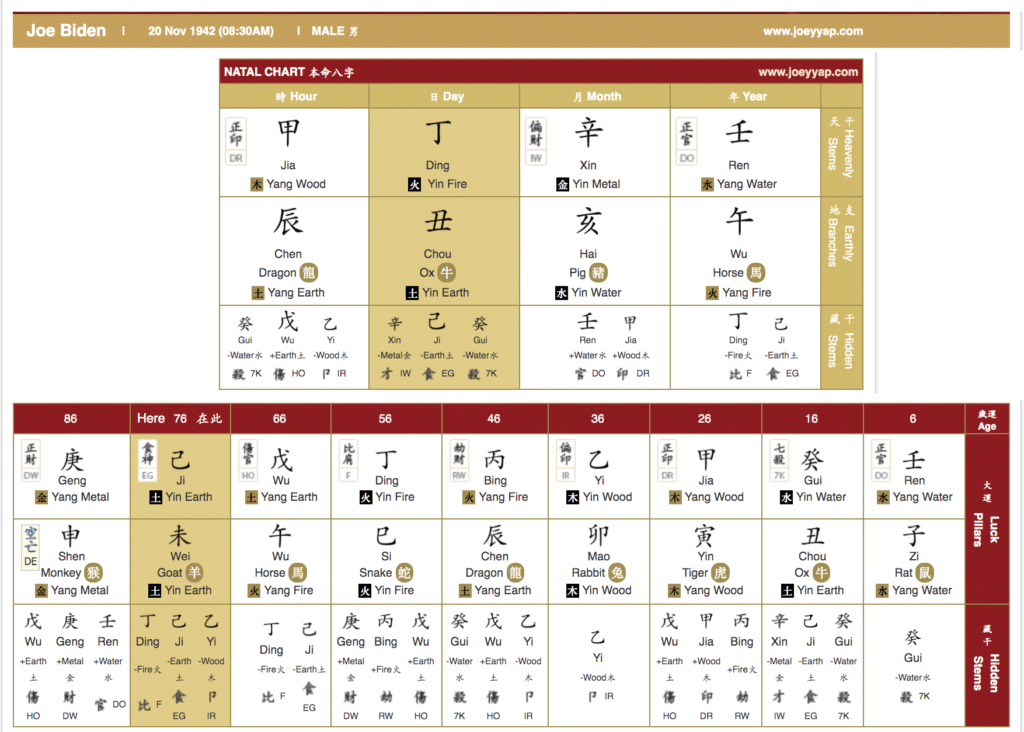 The Bazi is defined through the Element of the day of birth. For Joe Biden, Yin Fire rules his chart. The Yin Fire can shine in some occasions but above all it helps other to shine: this is arguably what happened with Obama, as the MSM then decided to depict them as the perfect bromance during the two terms of Obama. He allowed Obama to shine by being next to him and everything Obama was not: old, white, and a representation of the old guard. The contrast worked and reflected better on Obama than on Biden. That is one aspect to keep in mind: Yin Fire can often be better at putting the spotlight on others than on themselves. So Biden was arguably more at this place being a vice President than he would be a president. Yin Fire people, don’t take offence: your can truly shine by yourself in spirituality, education,  sports and entertainment more than in politics…

His full day Pillar is the Yin Fire Ox. As the Ox contains Yin Earth, Yin Water and Yin Fire, it shows different potentials: one is being a public figure (Earth/Output Element), another to make money (Metal/wealth Element). There is output here (Earth) and the money Element (Metal) – a good day Pillar to gain some power and influence. His direct output, Yang Earth, can help him to become a more prominent and forefront figure and arrives through his time of birth. It is contained in the Dragon that is more active in his life now, as Biden is almost 78 years old. Bear in mind that we assume here this time of birth to be correct. For Trump, that’ll be another story…

The tension between the Yin Fire of his day of birth and the Yin Metal in the Ox is also repeated with the Yin Metal now on top in his day of birth. In my personal and professional opinion, this shows a tendency for mental burnout or in some case mental problems. The jury is still out about Biden’s faculties at this stage, but this is a strong hint that he doesn’t take excessive stress and pressure so well actually. And there is more: the Ox also contains the Yin Water that clashes with the Yin Fire. It is not ideal for a man who want to be a leader on such a large scale to see the Element controlling him in his day Pillar…Unless Biden is used by others more powerful, which is likely to be the case. Can he actually use the Water Element to be Elected? This is THE question, as 2020 is a year full of Water…

First, a brief explanation. After 14 years doing my work and looking into different systems, I don’t work with the strong/weak Bazi classification anymore. What seems the most accurate is the main direction that the Bazi can naturally follows. This direction is defined by the relationship between the Element of birth (day stem) and the branches. It can changes over time through the influence of the Luck Pillar (Pillar that defines a specific 10 year period).

So with this in mind: at this stage of his life, Joe Biden can follow different Elements depending on the directions taken by his branches. He tends to favour Earth the most, but can use Earth, Metal and Water at different times. Right now Biden Bazi uses Earth the most, due to being his age and his current Luck Pilar showing Earth Luck Pillar from the age of 75 to 85 years old (the Pillar are shown on the picture in Chinese age = 1 year old when born. For Western age subtract 1).

Joe Biden’s astrology for the 2020 election

And now we are with Biden’s astrology prospect for 2020. What is the scenario for Joe Biden’s Bazi in 2020?

He is now in a rather supportive Earth Luck Pillar, since the age of 75. If we wouldn’t be, he wouldn’t be pushed as a candidate! This LP forms what is called a Stem combination with his chart. In Bazi, Yin Earth/Yi and Yang Wood/Jia combine and can form Earth, which is the case here. Having a Stem combination forming his most supportive Element, Earth, and in his time of birth Pillar (that relates precisely to this period of his life, 65 onward) is definitely auspicious. I argue here that what is happening with the Luck Pillar is always extremely important when someone needs to be elected for 4 years as President.  So far so good. 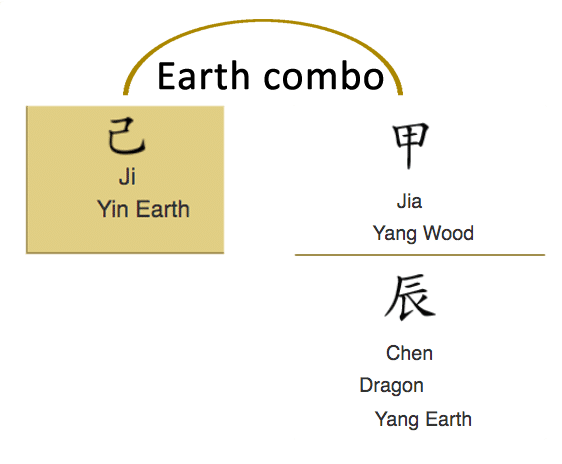 The movement between Joe Biden’s Luck Period and Hour of birth.

But the year 2020 is a Yang Metal Rat year: Geng Zi. And this is definitely a problem here: the Yang Metal of the year fight with the Yang Wood in his time Pillar and breaks the auspicious combination. And this is happening with the time Pillar that relates both to his late life (so now) and to his his children. Guess what: Biden’s problems for this presidential election come mostly through his son Hunter! That is a perfect illustration of what an auspicious combination broken by the year can do… 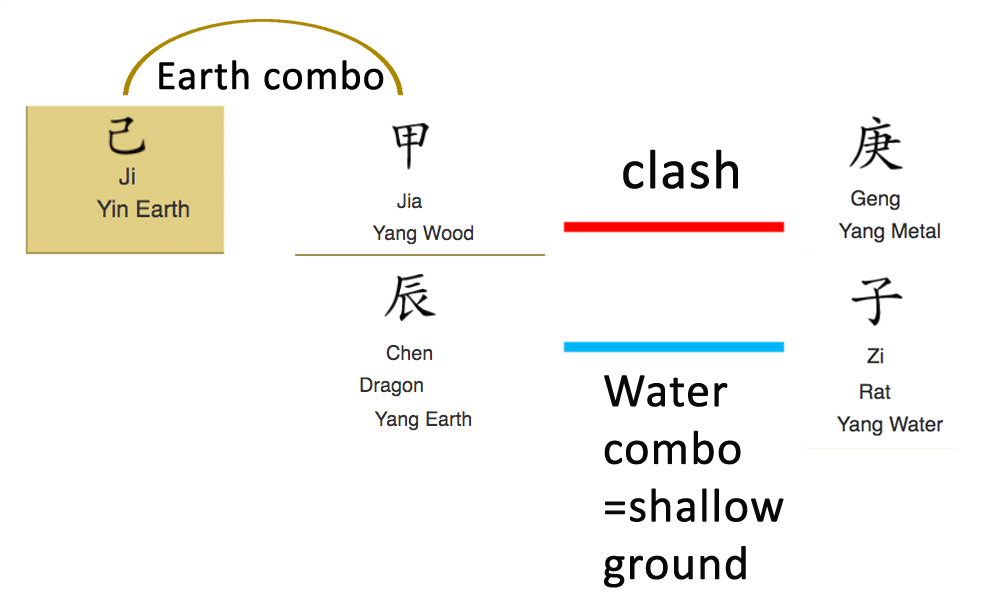 The complex movements happening for Joe Biden involving his time of birth, luck pillar and this year.

As for the Rat itself, it’s a complex sign that affects all Joe Biden’s Pillar. Wha the Rat does to this chart:

Some astrologers have their eyes turn on this seasonal combination forming as a sign of victory. It should make mister Biden, temporarily, a follow the Power structure – akin to a landslide win, a wave of votes to victory. Sure, but does his current Luck period ALLOWS for this Water to lead to victory? The real story at his age and to rule for 4 years is the time pillar and the luck period.  And here the time Pilar is broken and destabilised by the Yang Metal of the year and the support that he had through the Earth forming disappear.

The Earth in his time Pillar is also Yin Earth: and what happens when mixing Yin Earth and all the Water forming in his chart? We get mud. A muddled result, so something not very clear. It’s not the landslide promised by the strong Water wave formed anymore.

And we also have the matter of the Dragon itself becoming Water, as this is a solid ground suddenly becoming entirely unstable.

In other words, what was first sold as landslide and easy victory becomes muddy, unstable, and seems to vanish.

Election day: the astrology of the 3rd of November 2020

Now the day of the election is also significant. Here it is 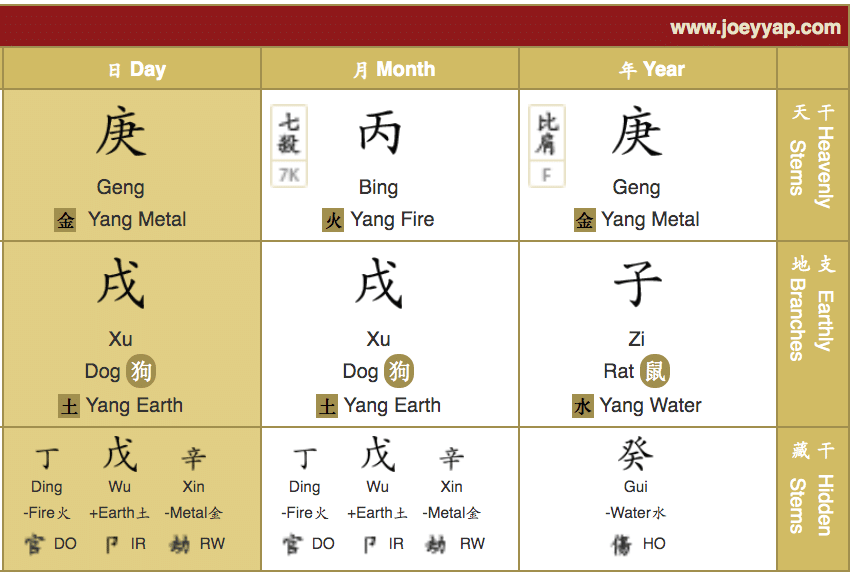 We see Earth and Metal on that day. Two Elements that Joe Biden CAN use. However it is the Yang Metal again showing up, the one that is detrimental to him this year as it attacks his time Pillar. Not great…And the Dog shows up twice, that clashes away the Dragon that is also his time Pillar. By keeping your attention on the time Pillar, you’ll understand that it doesn’t look good for Joe Biden…Finally the month is also showing Yang Fire, his competitor Element.

What about the next day when results could be know? It’s a Yin Metal Pig day. It is identical to his month of birth, and that is known as a trap/Fan yin structure. It usually is a sign of statism and being criticized rather than moving forward. It seems likely that the results will be contested, possibly recounted…

As you see, it’s a complex story so far to determine if Joe Biden’s will be elected. The final call can only be made looking at his opponent…

That’s part 2 of our analysis with Mister Trump…Stay tuned.

Of course you can contact me to order your own predictions to know what the future holds for you: laurent@laurentlanglais.com