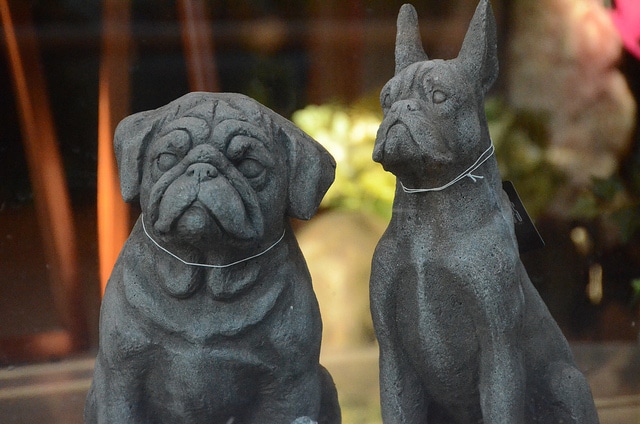 As the new solar month of the Dog is about to start, it is time to see what we can foresee for the world through astrological predictions. As a reminder, the system that I use is the Four Pillars of Destiny, also called the Bazi. Each time period such as a year, month or day is made of two different Chi – one on the surface called the Stem and one deeper called the branch. The interaction of the two energies give some good clue on the universal energy at work during a month; and the interaction of the month with the year add another layer of information.

For the solar calendar, the Dog month starts on the 8th of October 2016. This time we are going through a Yang Earth Dog month. The Yang Earth is the one associated with mountain and large rocks rather than with a fertile soil. Its qualities are resilience and solidity; its flaw can be stubbornness and sometimes a lack of compassion. It associates this time with the Dog sign, out of the twelve branches of the Chinese zodiac.

This month will overall bring out notions such as family, ancestry, foundations and what is it to be a tribe, a nation, a land…This Earth Dog month will bring many fights for lands and soil, opposing the views of some form of “progress” vs people fighting fo their rights. The ugly side will be that conservatism and discrimination toward those who don’t fit into a country, the idea of what a family is etc. The good side will be that Mother Earth and traditional people will in some case be more respected; that dysfunctional families such as Europe will try to improve; and that diplomacy could make some serious progresses. Here is the list of my predictions for the month, before some more technical explanations. If you prefer to hear my soothing voice and French accent, you can watch my Chinese astrology for the Dog month Youtube video.

Now if you are a Four Pillars of destiny student or aficionado, I invite you to read the more technical explication that follow.

The Bazi of the Yang Earth Dog month

First for the Bazi of the month itself. In a Yang Earth Dog month, the Yang Earth is found both inside the Dog sign, and on top as the Stem. It is the dominant Element of the month. When you stack boulder over boulder, you make a wall…And so you can see here how the ideas of borders, migration, countries and nations are central to this month. As the microcosm reproduces the macrocosm, the ideal of tribes and family is also central here. The identity of what makes a group a group – a nation, a tribe, a family etc. are all to be talked about during an Earth Dog month. The Dog is a very faithful animal; however, it can also become very stubborn. If you have played with a dog and a rope, you know what I am talking about: they don’t let go. And so the idea of conservative forces defending what they think is right will certainly emerge. The conservatives are gaining ground at this time: a candidate like Trump Is benefiting more from this energy. The better aspect is that the traditional forces such as Mother Earth, indigenous people and their lifestyle can also make their case better heard.

Now to understand why we will see earthquakes this month, we have to see some of the interaction between the roots of the Dog and the year itself. The year 2016 is in Chinese astrology the Yang Fire Monkey. The Dog sign contains as hidden stems: Yang Earth, Yin Fire and Yin Metal. With the Stem of the year, we now have: Yang Fire, Yin Fire, Yang Earth, Yang Earth. This is a natural progression: the Fire in its Yang phase, then Yin, generating Yang Earth. The problem is that the two Yang Earth are fed too much by the two Fire; this is a time when, rather than being still, they will therefore move. It is the image of tectonic plates moving on the earth crust in my opinion. A major earthquake seems therefore very likely…With two Fire going into Earth, I also see the image of bomb impacts destroying the land; I therefore expect more bombing in Aleppo for example, but in other areas of the middle East as well. Middle East is “in the center” and as such it is a strong Earth energy…This is also why I foresee a suicide bombing attack in such areas.

Now after the Earth is the Metal Element. In the Monkey sign of the year we see the Yang Metal; in the Dog we see the Yin Metal. We therefore now have Yang Fire, Yin Fire, Yang Earth, Yang Metal, Yin Metal. Notice what is missing in this order? The Yin Earth. The Yin Earth is a link for this month and will therefore benefits from the chain of events. This means that native people and their land should claim some victory. We should also hear about more traditional way of farming and managing the land will also. As the month addresses the issue of lands and diplomacy, there might be some progress with the recognition of Palestine as a state.

Of course the American Election incoming in November is getting a lot of attention in this October month. The month is all about Earth being very strong. And the two candidates for the position of POTUS are Earth personality; in his Bazi, Trump is an overwhelming Yin Earth chart, while Hillary Clinton is a Yang Earth chart. As I have mentioned, the Yin Earth is the one that benefits from the interaction year-month Bazi; the Yang Earth, rather, is under a lot of pressure and can feel an “earthquake”. On top of it, conservative forces are gaining ground this month. This, to me, show that Trump should prevail and that Clinton might go through a rough time. The new Wikileaks from Assange could be a big blow, as well as the progresses of the two ongoing legal actions against the DNC which admitted campaigning for Clinton rather than respecting the neutrality they are bound to through their status.

Talking about weakening, the Metal Element is in a weird situation this month. It is usually strengthened by the Earth, but here the lack of Yin Earth cannot efficiently produce and support the Metal. A Dog month in a Monkey year: the missing Element is also the Metal of the Rooster, which is in between the Monkey and the Dog. The Metal is therefore under scrutiny and tension this month. This shows to me the prominence of scandal of political nature, but also possibly with hi-tech or medical companies. It also means that some metal structure will collapse, hence my predictions about bridges and building. With the two Fire agitating the Earth and shaking the Metal, I also see the image of a potential nuclear plant incident which hopefully will be contained. The Yin Fire of the Dog however shines on the Yang Metal in the Monkey, which bods well for Hollywood- and industry using both Fire and Metal energy. Wall Street and finances use both as well and I don’t foresee a crash here. Next month, however, could be a different story…

While staying on the Elements, note that the Water Element is in a dire situation this month. The Yang Earth contained in the Monkey combine into Wood with the Yin Fire contained in the Dog. This Wood growing underground is another sign of the Earth moving; this tension coming from the Wood under the Earth also relates to the hurricane Matthew, an expression of a strong Wood energy shaking the Earth. The Yang Earth further stops the Water. And so we see women, which are more closely associated with the Water Element, in a dire position toward conservative forces. We also see, quite literally, water disappearing through drought or pollution this month.

Overall, while it is a time when conservatism will prevail and potentially attack people, we should also rejoice that the system will have its foundations shaken and that mother earth and the people defending her could win some of their fights during this Yang Earth Dog month of October 2016. While the month is likely to see some violence in the Middle East, attacks such as terrorism or shooting are less likely to occur in Western countries than last month. Overall, let’s observe how things unfold during this Dog month as it is a primer of the year 2018, which will be the Yang Earth Dog year in Chinese astrology.

That wraps this Bazi predictions for Wu Xu, the Yang Earth Dog month.  Stay tuned for your day master and 12 signs predictions and have a look at your free Feng shui luck boost for the Dog month.

One thought on “Bazi world predictions for October 2016, Dog month.”