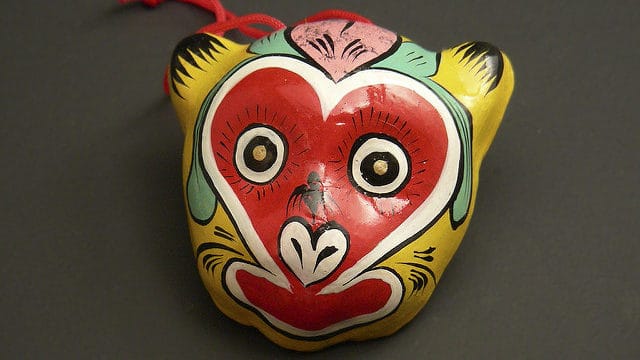 2016 is gone, long live 2017! Ask most people what they thought of the Monkey year of 2016: a common answer is that it has been quite the downer. I think it’s fair to say that this year has been challenging. How does it come that 2016, Monkey year has been so unstable and seemingly unpredictable and what is the forecast for 2017, Rooster year then? Time to turn to Chinese astrology to understand what a year’s sign brings to the world.

The Monkey year of 2016: the great trickster at work.

For Chinese astrology, 2016 was a Monkey year. The Monkey is a great joker, and it has indeed been true to his trickster’s nature. It is the master of surprises, going where least expected. If you have travelled or live in some countries like Indonesia and India, you might have come across some of those cheeky monkeys, stealing everything from your water bottles to your wallet. Well this is the Monkey for you: it does what it wants and will choose mischief over fairness if needed. But it is having a good time doing so. The Monkey year of 2016 has been true to its trickster nature. Monkeying around in Ubud in 2003. Copyright: Laurent Langlais.

Those were some of the predictions that I wrote on my blog a year about about this Monkey year:

Politics: Well, it’s going to be eventful I am telling you! First and foremost we obviously have the president race in the U.S. How will it pan out? I still have to write my predictions on who might end up being the next US president, but surprises are in store. With the Fire-Metal clash and the hectic energy of the Monkey, the race is ever changing, full of tricks and surprises. The outsiders might end up winning…

…The exit of the Euro zones for some countries will be much talked about, especially in regard of the financial crisis that is likely to happen….

…We could even see a resurgence of the old dynamics East/West block and the tensions of the cold war, between Putin and the US. Imagine for a moment what the geopolitical situation would be if Donald Trump were elected and its foreign policy with Putin…With Sarah Palin and Michele Bachmann in the oval office too. Judge Dredd meets Idiocracy! Either way, we can expect new conflicts, military interventions and situations to escalate in many countries. The US and UN will play the world police, but it will backfire. So, geo-politically speaking, it is all very unstable, full of conflicts and changes and not at all peaceful…

As you see, in my astrological analysis the surprises and instability of 2016, the Yang Fire Monkey year, were to be fully expected. The Monkey was never meant to play fair but there is a point to it…You can find my original article of last year here: The complete Chinese astrology predictions for 2016, year of the Fire Monkey.

In 2016, we were also shocked by the deaths of many talented people: multifaceted lunar poets such as Leonard Cohen, Prince and David Bowie. Or the talented, mental health advocate Carrie Fisher among many others…We have seen ugly revelations all over in the news: widespread sex abuses, conflict of interest in politics and more terrorism. The rise of fascism is happening again. Many terror attacks have shaken the world: in Istanbul, Orlando, Paris, Brussels…Finally, there has been the impossible choice of the US election ending up with Trump elected; a man who is now in charge of one of the most powerful country on Earth. One that very few wanted in the first place, as he seems egotistic and unqualified. Unless there is a bigger plan at work…

The biggest trick of the Monkey year.

In that sense the biggest surprise that was the election of Trump in the Monkey year is very significant. He is the dark mirror that the US needs to wake up. This ultra-capitalistic man, with seemingly little respect for other cultures, always putting business before any other considerations, is also part of the US culture. Somehow, it is what they were rooting for during the “glorious” Reagan’s era. Let’s keep it real: he is also part of all of us. Yes we all have a bit of orange inside. Before we go into 2017, allow me to briefly go sideways by Mexico before coming back to China, and see why the election of Trump is a wake-up call.

In the Mexican shamanic tradition, the world of dreams where we create our lives is the Nahual. The world where we are awakened, and that we believe is reality is the Tonal. The Monkey year was the year of the trickster but to give us a wake-up call. Could it be that Donald Trump is this shamanic wake up call, through exposing an ugly side and forcing us to deal with it? I can’t help but wonder on “What’s in a word”. Donald Trump = Donald Trumpet = Tonal Trumpet. In other words, a calling in the Tonal world (reality) that is sent by the Nahual world (dream). Besides, Trump is the embodiment of the trickster and was therefore the “Trump” card of the Monkey. Trump played this presidential race like a cheeky and fierce monkey and so he was more in synch with 2016’s energy actually. The Monkey time was not rewarding a call for unity, but rather encouraging tricks shown in plain sight. I offer the hypothesis that Trump is therefore in charge to show us the insanity of what we are creating through his own actions and influence on the whole world. So we can wake up and do better. And I hope you’ll see the irony of seeing the bigger plan at work with Trump via the Mexican shamanism…

Back to China then. As we are now debuting a new year, what can Eastern Metaphysics teach us about the energies shaping events to come, and how to adapt to those profound changes? Time to explore the Fire Rooster year world predictions. The Monkey year has played all its tricks on us. Pic: http://www.flickr.com/photos/laughingmonk/

2 thoughts on “A world forecast of the Fire Rooster year 2017. Part 1: The tricks of the Monkey.”