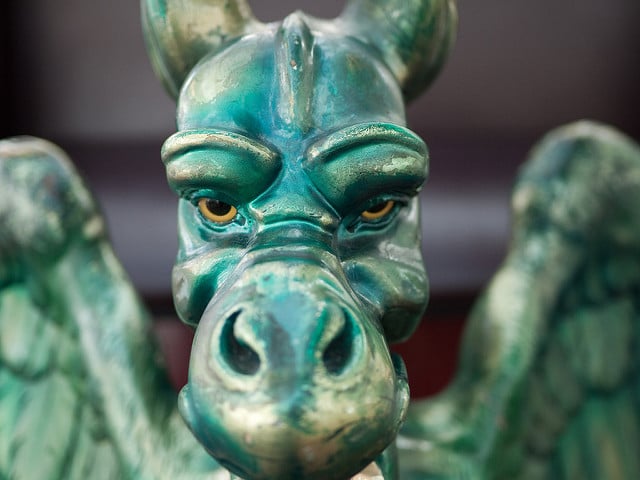 In this article, we are taking a look at the transient Qi (energies) at works during the Chinese month of the Dragon (April 2017).

In part 2 we’ll look at what you can do to be in the flow, as well as the Feng Shui of the month.

The Yang Wood Dragon month started on the 5th of April 2017 in the solar calendar and will go until the 4th of May included.

This month we have a double dynamics at work. On one side, the Yang Wood can apparently grow in the Dragon. The Dragon is an Earth sign, but it is also full of Water. The Dragon sign is indeed known as the storage of the Water Element: it is therefore a “wet earth”. A wet Earth is ideal for the Wood Element to grow in, but there is more to this story…

What is missing here is the Sun, but we have some Yin Fire coming from the year itself. Remember that the year 2017 is not just a Rooster year, but a Yin Fire Rooster…You can read this year’s analysis and forecast here.

What does it mean for the Wood Element to be strong and growing during this month? First, we can hope that ecological topics will take over in the news. As the Wood represents both the natural Element and the expansion of most civilisations, I expect to hear about new ways to go forward and seeing nature and hi-tech working together. News about renewable energies and development in greener tech should be seen. I also expect the eco-construction and innovation around hemp, bamboos or other plants could be making the news somehow.

Another good aspect is that arts are encouraged by the strong Wood energy. Expect new coming from the world of fashion and textile, as well as mind-blowing display of artistry (street artists for example) but also big news for the world of architecture, most likely.

The Wood growth also has to do with education and we can expect reforms around educations to be the centre of much heated debate. Religion and the how secular societies should deal with it will also be a heated topic.

The anger is building up

Here we also touch on another aspect of the Wood, which is the anger it awakens. An excess of Wood produce bile in the liver, which brings the anger out. While the Wood seen here is not excessive, you will see ecological opposition as well as citizen movements taking over this month. Politicians in charge are likely to face strong opposition with the measures that they announce. A Dragon can sometimes awaken from its slumber to protect the Earth: of all Dragons, the Wood Dragon is certainly an eco-warrior.

The Green Dragon is an eco-warrior. Pic: https://www.flickr.com/photos/belpo/

We now have to look into the less fun aspects of this month: the tension of the Wood Element growing into the Earth. In Bazi we look at the 3 layers of each sign: the Stem, the Branch and the Roots. The Roots of the Dragon (= Qi/energy hidden inside) are Yang Earth, Yin Water and Yin Wood. The Yang Earth is therefore in direct opposition with the Yang Wood stem of the month. And the image of harmonious growth at first is actually more complicated: the steadiness and inflexibility of the Yang Wood meets the even stronger steadiness and inflexibility of the Yang Earth. Think of a big oak vs a mountain. Both are not going anywhere, anytime soon. But the tension of the roots trying to hold on to the soil and rock underneath is real. The Wood grows, but it takes some efforts.

In term of natural disasters, this tension is likely to bring earthquakes on one side, and tornadoes on another one. In term of world politics, it’s a bit of an earthquake too this month.

Of course it’s hard not to talk about Trump in such predictions. What is interesting here is that the Yang Wood growing on the wet Earth of the Dragon is also the image of a mangrove tree. And what does a mangrove tree does? It drains the swamps…Exactly like Mr Trump say he would (but of course is not doing).

However, the Yang Wood of the month actually combines with the Yin Earth that is the day of birth of President Trump. So I expect him to go into “phase 2.0” this month; advised by Bannon, he will put in motion some measures of his program that will shock and trigger ripple effects. Some will be very un-ecological, to keep in line with the clash of the month. Some might actually be targeting the Washington swamp, but let’s not hold our breath here. Still, it’s going to be an eventful month for the US.

Generally speaking, as the clash of Yang Qi is in the month and the anger is building up through the Wood, we can expect a tense, difficult month in term of diplomacy.

We are going to have two blocks with view opposed to each other, and there is little dialog. Rather it’s a bit of a bullfight. The Yang Wood wants to grow upward and expand, the Yang Earth wants to stay still and move nothing. This hardly speak of resolution of conflicts…Expect difficult time in regard to Brexit negotiations, the Syrian conflicts and Trump’s actions then.

A Dragon month inside a Rooster year

Let’s not forget that when we now put the year’s Qi into the equation, the Yin Fire and Yin Metal come into play. The Dragon’s sign contains the other form of the Wood Element, Yin Wood. Yin Wood can bring some flexibility and help with negotiations, diplomacy, and generally to bend and adapt. Inside a Rooster year, the Yin Wood is totally chopped down by the Yin Metal to allow the Dragon-Rooster combo to form. This combo is generally auspicious but work more toward the Metal that gets stronger. The flexibility of the Wood is therefore gone…This year is a Yin Fire Rooster and this month a Yang Wood Dragon. We therefore have a Wood-Metal-Fire clash rather than just the harmonious Wood growing, or the harmonious Dragon-Rooster combo. It gets complicated…

It is a recipe for conflict and more bloodshed, with an increase of repression and coercive force. The Wood was apparently winning at first, but the control of Metal makes a comeback. As an astrologer, I’d say that it seems difficult under such clash to not see one more act of terrorism manifesting…

Another difficult prediction is a problem related to an atomic plant and this type of energy emerging this month.

And the conflicts between citizen and governments, through strikes and police/army repression, will be seen through the month.

The two steady blocks of Yang energy opposing each other in this month can easily represent East and West again. Expect conflicts to escalate this month and the tensions to go up. It’s not the month for world peace, I’m afraid.

Still, there are ways for you to manifest a good life inside this clash. How? Let see this in part 2 on the Feng Shui of the month and what you can do to feel better in April…

One thought on “Bazi world forecast for the Dragon’s month, April 2017.”