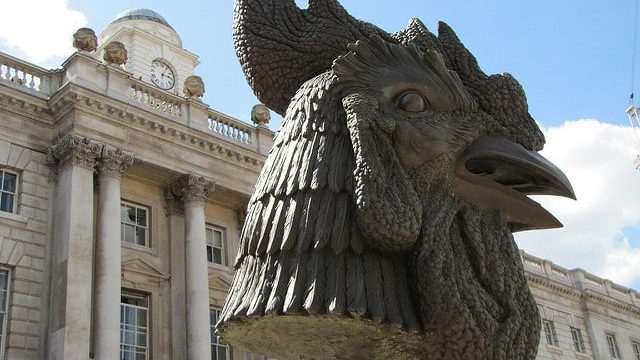 In astrology, many people think that the return of their sign means this is “their year”. In my experience as an astrologer, far from it. The return of your own sign is not so much a lucky period, but rather one during which you are evaluating your whole life and can be judged by others. If you know the Tarot, the Justice card perfectly encompasses this idea; in numerology, a “karmic year” also speaks of those aspect. It is a year during which, Rooster, you are on the grill. Hence the “Fire Rooster”! Joke aside, you will see that in many areas of your life it is a make or break type of year. You need to address what doesn’t work and go deeper into what works well. At work as with your love life, you will be evaluated…The karma that you have developed those past 12 years can also come back one way or another. It you have developed a good karma, then the year could be full of good surprises.

This year could be a major turning point, Rooster. As I have said, it is make it or break it…If you are in a couple but have overlook some problems in your relationship, expect an implosion or explosion in 2017. Everything will be discussed and you will reap what you sow. To go through this year more easily, you first need to listen to your partner and second be humble. A Rooster like to show of and often have a strong ego…This is the attitude to avoid in 2017. Take this year as a great opportunity to evolve, rather than making it a battlefield. It could go very well if you are willing to listen…

For single Rooster, meeting could be a frustrating process this year. You will tend to come across characters who are not on the same vibe…Your ideas and personality will be diversely appreciated and you can’t rely on your usual charisma. For women of the sign it is looking slightly better, with a possibility to meet but more during the first half of the year. Try to see beyond the proverbial book cover: you could be quite taken by a look and attitude at first, but should see if your personalities are compatible still.

The Rooster work and money during the Rooster year

It is also an area of your life in which you will be on the grill. Expect to be judged and evaluated on your performances during the previous years. As I was mentioning in the intro, if you have been mindful to develop a good karma and have displayed the right attitude, it could go quite well. If however you have been lackadaisical, you will now see that your bosses took notice of it. At work too, put your ego on the side at all costs. This year requires great humility from you, and if you loose track of this you are in trouble. Acknowledge your faults if you have made some, and ask what you can do to mend them. It could even be the year of a good surprise such as a promotion, if you have nothing to worry about. If however you need to find work, it is a bit harder this year but if you don’t give up you should find some.

For your money, it is a sensitive year. You will have expenses, that is a given. It could also be that, temporarily, you have less income. Either way there is a bit of stress around the money question…but remember that there is karma at work here. The entire year is some kind of test on your morality and resilience. Humility and lessego are the right attitudes, and if you follow those advices you should find solutions.

It is also a more sensitive area for you, Roosters. The Fire also contained in this year attacks your Metal nature. It is a sign of inflammation, especially for your lungs and for the chest. It is wise for you to put warm clothes on in 2017, Rooster, and use Chinese medicine preventively. Essential oils and acupuncture are your best friends in 2017…The Earth energy is also helpful. This means that rather than running everywhere like a headless chicken, you should aim at grounding yourself: through meditation, gardening, working on your home etc. Avoid travelling too much: your immune system is more sensitive to seasonal viruses and local illnesses this year. Cocooning is your best solution to not loose your feather in 2017, Rooster. The second half of the year will push you to think a lot. It is the ideal period to start a psycho-analysis, a family or couple therapy etc. Stay kind to yourself however: now is not the time for guilt, but rather to reinvent yourself to build a strong future. This is the year when you have to revisit the foundations of your life in a 12 year cycle: do so!

Good or bad, it’s all a question of adapting. Even during a stormy weather, any sign can have a great year. The key is to know what is coming for you, prepare and adapt. And did you know that you can have one, but also two, three or even four Rooster signs in your birth chart? It is called the Bazi or Four Pillars of destiny. This form of Chinese astrology that I specialise in provides you with your personal map for this life, to find your true calling, know your timing and evolve positively. To know your true self and foresee what is ahead for you during the Rooster year of 2017, contact me now for your Bazi consultation. The Rooster sign by Ai Weiwei, and its 2017 horoscope by Laurent Langlais! Credit: http://www.flickr.com/photos/mirfee24/

5 thoughts on “The Rooster horoscope for 2017, year of the Fire Rooster.”