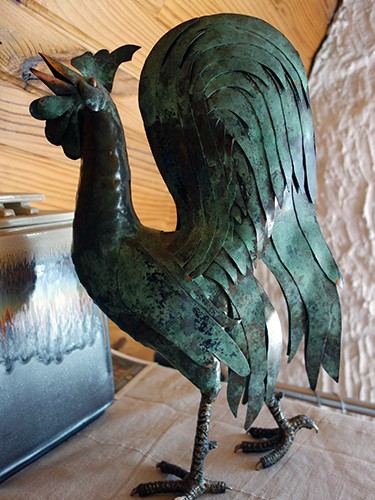 A coq or rooster made by the Canadian artist Jacques Bradet

So, today on the 8th of September 2014, we are starting the month of the Yin Water Rooster. It is therefore a good time to look at what this type of energy brings to this year and for international affairs.

The Yin Water Rooster, Gui You, is by itself a sign that is quite harmonious. The Metal produces Water, and having the soft, Yin Water on top of the Yin Metal contains in the Rooster is a natural fit. The Metal is not really weakened by the Yin Water but rather polished; the Metal strengthens the Water itself.

This month therefore the Metal and Water industries should do better. The Wood can benefit from the fact that the Water is getting stronger, but not as much as last month that had more Water within. The Earth industries are not so strong this month, and the Fire neither.

However, the month can only be analysed through the year. A Yin Rooster month inside a Yang Wood Horse year is not the most harmonious. We have a direct clash between the Yin Fire contained in the Horse and the Yin Metal contained in the Rooster. A clash of branches is not to be overlooked.

The Rooster itself is a proud animal; a bit softened by the Yin Water. Furthermore with the clash of Metal, Fire AND Water, even if they are all Yin, we can expect escalation in conflicts and failure of diplomacy. Think about the conflict in Israel, the Islamic State and the Russia/Ukraine situation. Despite the overall Yin energy, I don’t think this month will be a quiet, pacifist one.

In term of medicine and science, this Fire-Metal clash should bring interesting developments: discoveries or announcements in telecom and I.T sectors most likely (Iphone 6 revealed maybe?) but also likely exposure of medical malpractice and scandals. I wouldn’t be surprised if more whistleblowers to show up in the domain of medical science. Medical achievements and discoveries should also be seen, as the Rooster is an academic star to the Yin Fire (Ding) contained in the Horse. As far as epidemics are concerned, there is no turbid water and Earth this month, and the Fire is not strong so I think things should get better: with Ebola for example. The transport industry and finances should do better.

On a personal level, if you have a weak Metal, weak Water or Strong Earth Bazi, you should benefit from such influence. Strong Fire people won’t do too bad either…Strong Metals, strong Water, weak Wood, Fire and Earth will not like this influence too much. In term of branches, the Rabbit is obviously not having too much fun here, and likewise for the Tiger, Goat, Horse and Rooster. The Dragon, Snake, Pig and to some extent the Ox can benefit from such influence. It can go either way for the other signs. But remember, the whole Bazi chart and dynamics of the Elements always take over the branch of the year in Bazi analysis.

You can order your Bazi analysis and report if you are in London, the UK and worldwide to understand what is in store for you.

Stay tuned for the Qi Men Dun Jia and travel advice for this month!