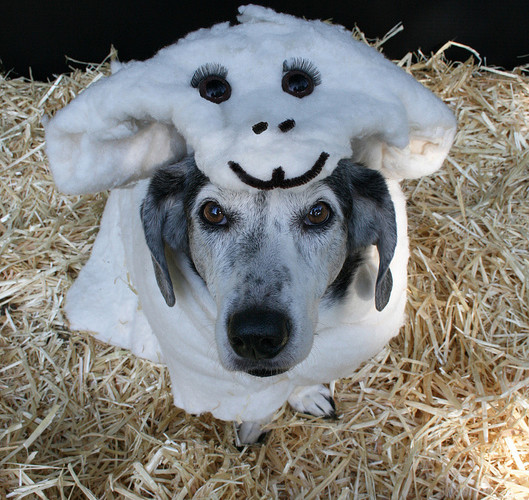 Welcome back for part 2: time to analyse this Yang Fire Dog month and to see what it has in store for us. Remember that we are using the luni-solar calendar and the time system and method known as Bazi, our Four Pillars of destiny. This advanced form of Chinese astrology work with the notion of Stems and Branch, one being the “surface” Chi and the other the “deeper” Chi. So this month we have the Yang Fire on the surface, and the Dog which is an Earth sign at the bottom. How do they interact together and with the year? A dog in sheep clothes. Dog month in a Goat year! Credit: http://www.flickr.com/photos/petsadviser-pix/

The Yang Fire is the Fire of the Sun, warm, strong, beautiful and radiating. It usually brings comfort and helps others to live and grow. Its more challenging aspect is that it can also burn and destroy if the heat is too strong: in form of severe sunburn or dehydration for example.

We’ll get to the Dog sign soon, but here is the general idea of what I think we’ll see this month for the challenges:

As for the most auspicious aspects of this month, we should see:

Let’s now review them one by one to understand the logic of those Bazi predictions. To get what is at work here, we need to have a look at the Dog sign too. The Dog is an Earth sign. Its hidden Stems, that represent the energy the Branch stores, are: The Yang Earth (Wu), the Yin Fire (Ding) and the Yin Metal (Xin). With the Yang Fire Dog, we then have two Fire working together: the Yang Fire of the Sun, and the Yin Fire contained in the Dog, that is more similar to the flame of a candle. The Dog branch and the Stems it contains. Produced with the Joey Yap software.

The excess of Fire during such season, close to winter, is not ideal. Normally the Yang Fire energy belongs to the Summer, not to the fall/autumn season going into Winter. Furthermore, you have to keep in mind that the Dog is also known as the storage of Fire as an Earth sign. We usually want a storage sign to be quiet, not activated. Here with the Fire stem we have an activation of the Fire stored in the Dog. This Dog is usually nice, playful and with a good behavior. But kick it a bit too much and it becomes a fierce, biting dog.

This means that Fire related events are bound to happen. In regard to human activities, it indicates military interventions on one side – with firearm being used – and possible terrorist attacks. Due to the fact that there is still the benevolent side of both the Yang Fire (=radiating Sun) and Yin Fire (=candle showing us something) at work, there is high change that a terrorist attack or gunning situation could fail or be prevented. This prediction is also due to the fact that the Yang Fire shines on the Yin Metal contained in the Dog = bringing some facts to attention, exposing some machinery that were hidden. So this leads to the idea of finding a bomb, or preventing an attack. This is also the reason why I predicted the finding of a WW artifact or landmine. Regardless of the benevolent side, fire will be used this month and blood will be shed unfortunately. Why? Because beside the excess of Fire, the Yin Metal of the Dog also cut the Yin Metal of this Goat Year.

In term of natural events then: volcanic activity that might severely affect a city, fires burning some forest, possibly on a mountain side and more consequences of the drought, notably in California. Why?

With the strong Fire on top of the Dog that is akin to a mountain containing Fire (Yang Earth + Yin Fire), we have the strong image of a volcano erupting this month. The Fire is overflowing in form of lava…The prediction fires burning some forest, possibly on a mountain sides is due to the same logic. The Fire is strong, and the Yang Earth/mountain could be exposed. Moreover, I also take into account here the interaction with the Goat year, as the Fire this month will burn the Wood of this Yin Wood Goat year. Finally the dryness of the month, with a lot of Fire and dry Earth inside an already earthy year, means that the Water is nowhere to be seen. This should translate into droughts or consequences of droughts to be dealt with.

Speaking of Dog with Goat, those two signs together have a punishment formation. This punishment exists when the Goat, Dog and/or Ox are next to each other. Such punishment usually brings mistakes of judgment. Typical example when it happens for a personal Bazi are: signing a contract that you then regret for having not read the small lines; falling in the staircase because you were absent minded; forgetting to turn off the tap and having a mini-flooding at home…Those kinds of events, that you could prevent by being more focused, think more, and be careful with your words and actions.

This is the reason why I foresee events such as: A few diplomatic mishaps and Brands and famous people who will ask to be excused for their doing on social media. Likewise for the bug and product recall of a Fire related industry. There will be people apologizing for their behavior, some egos bruised, and some misunderstanding all along the month. This is the Dog and Goat working against each other… Dog and Sheep in a self punishment. Credit: http://www.flickr.com/photos/vidyo/

As for my prediction: exposing a medical scandal and/or protest again a government measure deemed unfair, it is due to a combination of factors that we spoke about. The Yang Fire shine on the Yin Metal, which to me means some new aspects brought to the light and concerning a Metal industry, such as medicine or a government. The combination Dog-Goat with their punishment means that a Metal related brand or activity should be in a dire position during the month.

Speaking of medicine, the prediction of breakthrough in medicine and research, especially in the field of cardiology and possibly eye surgery is also due to this combination of Yang/Yin Fire and Yin Metal. The Fire relates to the heart and eyes in the human body, two obvious areas this month.

The humanitarian actions and philanthropist acts that I foresee are also due to this Yang and Yin Fire at work, the Sun and the candle which bring human warmth and compassion.

For the economy, the strong stock market in most places and new development and prospect for the oil industry are also due to the strong Fire of the month that is sustained by the Wood of the year, and the Metal in the Dog that represents profit for the Fire industries. The same logic applies to Hollywood movies, an industry driven by a mix of Fire and Metal, for the glamour.

By now you have probably guessed why I expect announcement around the solar panels industry and good profits for the gaming and high tech industries.

Why the decline in GMO? GMO and this manipulation of nature is more directly Metal related, and with the strong Fire exposing and controlling the Metal this month, anyone in the Metal related business who doesn’t have strong ethics will take a hit, in my opinion. The GMO are the strongest contenders.

As for archeology, how do I come with such prediction: an old, enigmatic text finally decoded by archeologists; or the discovery of an old document shinning new light on an ancient culture. Here is the logic. Yang Fire shinning = light exposing something previously hidden. Yin Fire in the dog + Yin Metal + Yin Wood in the Goat = reading or writing a text with some that was either carved in stone (Yang Earth of the Dog + Yin Metal as a “pen”) or is on old textbook (Yin Wood of the pages + Yin Metal of the pen). The Yin Fire is also like a gentle light focusing on something…Hence this prediction.

And now for part 3 here: advice for your wellbeing, and the forecast for your Bazi and sign of the Chinese zodiac.