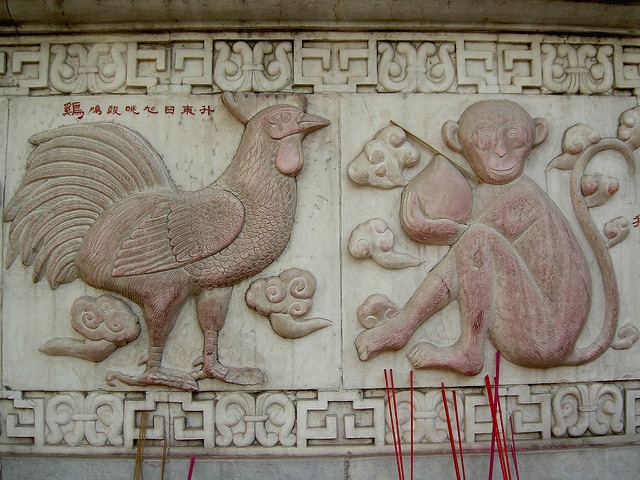 Welcome back to www.laurentlanglais.com and the Chinese metaphysics blog, the place to read about Feng Shui and Bazi and to understand the mecanics of those Asian philosophies. After a well deserved summer break that took me to Colombia, at the time of the historical peace treaty, I am now back with the Bazi predictions for the month of September. Some of you also eargerly await for their Feng Shui and QiMen Dun Jia free luck boost, so here is the article for this Rooster month.

The summer has seen strong wildfires in different parts of the world, earthquakes, religious polemics and protests against governments, but also historical moments like the one I first mentioned, the peace treaty between the FARC rebels and the Colombian government, ending up a 52 years old conflict. It is interesting to see that as governments lack more and more money and have their handfuls with other issues, the war on drugs is coming to an end in several areas – a trend that in my opinion as an astrologer will continue and expand in period 9, starting in 2024, that will see a return of the mind expanding plants such as psychedelics. More on this later when I’ll make a broad forecast of the next Feng Shui period. For now let’s examin the Chi of the Yin Fire Rooster month that will go from the 7th of September to the 7th of October (included) in the Chinese solar calendar.

I am first going to examin the dynamics brought by the Bazi Stem and Branch for this September month, then we’ll move to the interaction with the Yang Fire Monkey year of 2016. I am first going to list my Bazi predictions then will explain the logic of how I came to those conclusions.

If you want the short version: the shit is hitting the fan.

If you want the long version with slightly more explanation, it’s below. So here we go. When we look at the interaction of the heavenly stem and earthy branch of the month first, which are the Yin Fire and the Rooster. The Rooster contains one hidden Stem as a Root, which is the Yin Metal = Xin. The Rooster is the peak of the Metal Element, one of the four Peach Blossom stars. So we end up with Ding interaction with Xin, in other words Yin Fire vs Yin Metal. This is the obvious and pure expression of a Fire and Metal clash. What does a Fire/Metal clash means? It is an illustration of bloodshed, violence, explosion with tiny metal pieces flying. It is the symbol, to me, of bullets fired, aggression, shooting, terrorist acts and military intervention. The Yin Fire is more the form produced by humans, and so is the Yin Metal. There is here the aspect of premeditation, sabotage, and if you mix violence, explosion, sabotage and premeditation, the idea of a major terrorist act comes strongly to mind.

In the more positive aspects of the Yin Fire/Yin Metal clash, we see that the stock market, despite its up and down, shall this month avoid a crash. This is because the energy favors the Fire still, which rules the hectic movement of the stock market. As Fire controls the Metal this month, eventually the market avoid crashing – but the clash and the interaction with the second half of the Monkey year, more Water-y, brings its up and down. Another expression of the dominance of man-made Fire on Metal will bring us great technological innovations, and the fileds of advanced optics, computer components, supra-conductors and possibly nano-tech comes to mind with this association of the refined, more details oriented form of both the Fire (inspiration, creativity, channeling that leads to discoveries) and Metal (hi-tech, metal related products). The combination Fire/Metal in its virtuous form favors, in my experience, the entertainment industry, hi-tech and space-related discoveries.

As for my other astrological predictions, the interaction with the year has to be taken into account. Here it’s going to get technical, so please bear with me. We need to see the full interactions stems/branches/hidden stems of this month-year Bazi combination to understand what is happening here.

On top of the Yin Fire/Yin Metal opposition, we now have: The relation between this Chinese month and year, September 2016. Graphic produced through the Joey Yap website www.joeyyap.com

That is quite a bit of Bazi oppositions, combinations and relations to ponder about! To me, the competition of the two Fire and the fact that the year Stem “robs” the month hidden branch is the image of a sabotage against a government institution, a cyber-attack and a military intervention. It also is linked to one or more political scandals in high places, think about presidential elections in the US but also in other countries.

The Bing-Xin combo can produce the Water Element according to some schools. This would mean that we have this complex process: two Fire attacking the core of Metal and feeding the Earth – then Fire-Metal combo producing Water. In other words, in my astrological opinion, it is a sign of an submarine earthquake and potential tsunami but first and foremost triggered by a volcanic activity.

The two Fire working at feeding/drying the Earth and the weaker Metal means, on the other hand, some drought and tough harvests in some areas.

The harmonious side of the Yin Fire and Yang Fire-Yin Metal combo are some real advance in hi-tech, despite a month with bugs and cyber attacks. Expect major news in space discoveries as both Fire working together = Fire of the Sun (space) and Fire of the human intellect.

What about the Ding-Ren combo then? To some it produces Wood. What would the Wood Element, absent from this year and from this month, brings to the equation? It would feed the Fire that is already too strong for the period. It would therefore confirm some explosion of violence with some possible anger. It would however softens the Ding-Xin opposition. The Yin Fire-Yin Metal clash is less direct this month, as Ding is also involved with Ren (Yang Water) to produce Wood, and Xin is involved with Bing (Yang Fire) to produce Water. Here is how the all scenario can unfold in some cases this month: explosion of violence followed by negociations between governments and some citizen and heading toward some deal – think of what happened in Colombia with the FARC and the Colombian government for example. But also scandal exposed in full daylight that brings some system closer to the people will by exposing corruption: here I really think several democratic processes will be under scrutinty, and most notably in the US. This month, despite the violence and possible bloodshed in some part of the world, democracy will prevail and a “cleaning” of the system will be seen.

That wraps this Bazi predictions article for Ding You, the Yin Fire Rooster month. You can now check what is the forecast for your Chinese sign and Bazi. Stay tuned for your day master and 12 signs predictions and have a look at your free Feng shui luck boost for September. The Rooster month is an excellent time to have a Feng Shui and Bazi consultation, in London or anywhere in Europe, to see the benefits from springtime onward.

One thought on “Bazi world predictions for September 2016, Rooster month.”