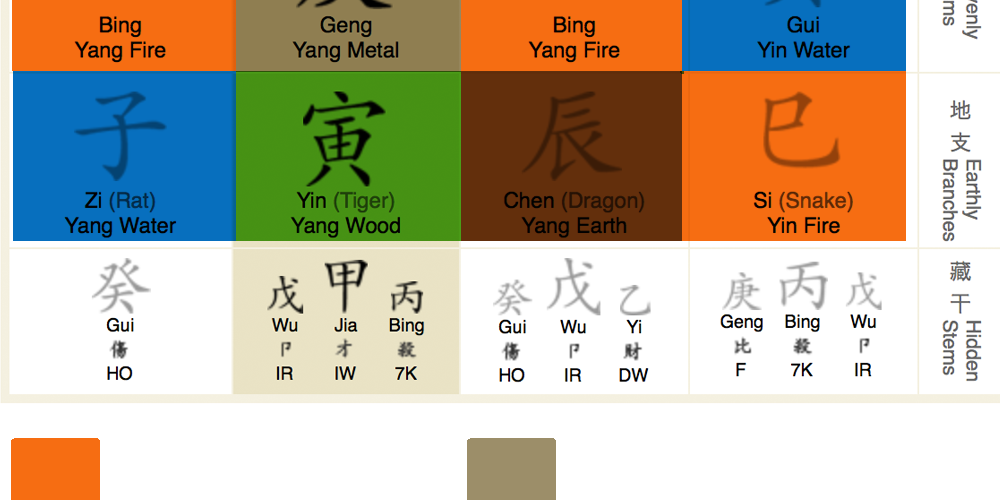 Finally, we expand our horizons by looking at other aspects of the Five Elements. We now have their seasons, locations, Elemental frame, respective colors and shapes and we know their cycles. A theory is only useful if it has practical applications and so we need to connect the 5 Elements with aspects of our lives.

One aspect that is less known but very important is the Ho/He Tu numbers, sometimes referred as the Feng Shui numbers. There is a close association with some numbers and the 5 Elements. By using those numbers in car plates, house numbers, society addresses but also in groups of objects we bring in the vibe of the Elements. The trick is that those He Tu numbers are the one that should be used to reinforce the Feng Shui of an area; NOT the numbers of the magic square known as the Luo Shu…

To clarify, the He Tu is believed to have appeared before the Luo Shu in Chinese metaphysics. Both are connected: for example you’ll see on the Luo Shu the number one associated with the North = Water sector and three with the East= Wood sector. The trick however is not to derive all associations linking the Element of a sector with the respective number on the Luo Shu. For example, on the Luo Shu, four is in the Wood sector of the South East. But 4 is NOT a Wood number, it is a Metal number in the He Tu…So the Luo Shu is a map and is used for calculation; but for enhancement in Feng Shui, we use the He Tu numbers associations.

To compare with the Luo Shu and repartition of the Elements, which is something different – see below. You’ll see that the pairing are still close to each other; going clockwise, we have 8-3, 4-9, 2-7, 6-1 and 5 in the center. However, only 1, 3 and 5 are placed in a area connected to their Element in the He Tu. To summarize, the Luo Shu is used for calculation but is not the base of the “Feng Shui” numerology used to enhance a specific sector.

Now, exploring other aspects of our lives with the 5 Elements. In term of career, here are some useful associations to know:

Those are a few examples showing you how different careers are ruled by different Elements. If you know which are your best supportive Elements, you can then go toward a career that works for you. How to know your own supportive Elements? Through the analysis of your Four Pillars of destiny, also known as Bazi; another expression of the 5 Elements concept in action.

The Bazi is your spiritual DNA, your personal map in this lifetime. Based on the Four Pillars that constitute your year, month, day and time of birth, it shows your personality, strength and weaknesses and part of your karma. It also indicates the best suitable career for you and your personal timing to open a business, meet someone or get married, move to another country etc. In other words, it is an invaluable tool to get to know yourself and your fate and change your destiny for the best. You can read more on the principles of the Bazi here and also read my monthly world predictions based on this technique.

The Bazi is also the 5 Elements at work. A chart is read in relation to your day of birth. Basically the Element ruling your stem of birth – that is the character on top of your day and it represents one of 5 Elements in either Yin or Yang form – is the reference point. Depending of its support through the chart, the Bazi is deemed strong or weak and this has consequences in term of making money and career for example. The same cycles of the 5 Elements apply here but with a twist, as new associations are brought into light. They are as follow:

The self Element represent your fundamental personality, an archetype based on the 5 Elements. For example a Yang Wood person is usually a bit right, while a Yin Wood person is very adaptable. This Element seen elsewhere in the chart can represents siblings, close friends or competitors.

The controlled Element represents the money one can make: the association is quite logical here. So if we speak of a Metal person, the money Element in the chart is Wood. This is based on the controlling cycle. There is more to it: for a male person, the controlled Element also represents potential partner and the spouse Element. This is based on the Yin/Yang polarities here as well, as the Yang is more closely associated with the male gender and Yin with the female gender. Please do not see here material for a new feminist fight, as this is about Elements and polarities, not about the male dominance in society.

The produced Element represents the ability to communicate, productivity, artistic skills in some cases and also on affinity to have children. So, if we take the example of a Fire person, this Element is the Earth. This is based on the productive cycle of the 5 Elements. A chart with abundance of produced Element can belong to a very extrovert person; one lacking might indicates someone who struggle at expressing herself for example.

The placement of each Element in the pillars is about different aspect of our lives – career, health, marriage, children etc. We will explore the Bazi more in other articles, but for now just know that this is an advanced form of Chinese metaphysics, your personal profiling that also rely on the 5 Elements. The Elements in a Bazi chart. Produced with the Joey Yap software, additional graphics Laurent Langlais.

A look at Chinese medicine and nutrition

An article on the 5 Elements would not be complete without speaking of the associations between the Elements and organs and body functions, and the way to balance them through nutrition. So here are a few examples:

Water Element: it relates to the kidneys, the urinary tract, the ears; but also with tears and sadness, the positive aspects being wisdom and calmness. Black food and those associated with the sea can make the Water Elements stronger. It is stimulated by the salty flavor.

Wood Element: associated with the liver and pancreas, but also with growth and anger. The positive aspects are of the emotions are altruism and compassion. The Wood Element can be strengthened with adding young vegetables, poultry. some raw vegetables (although those are not part of TCM) and generally plant foods high in water. It is stimulated by the sour flavor.

Fire Element: associated with the heart and eyes, and the emotion of joy but also aggression when in excess. The Fire Element can be strengthened by bitter tastes, spicy and dried food and by cooking methods such as using an oven. Swedish Bitters are a great way to support the Fire.

Metal Element: associated with the lungs and large intestine. It is stimulated by the pungent flavor and also food such as raw dairy, onions, garlic. The emotion associated are grief but also courage.

Of course the state of the food, the cooking method and the seasons will all have a direct effect on the proportion of the Elements associated.

So, as you can see, the 5 Elements are much more than a theory: they have practical applications in every area of our lives. Through the 5 phases we can understand who we are, what benefit us, how to design our perfect home, how to launch a successful business, and even heal ourselves. The 5 Elements actually rule every aspect of the physical world. It is through the Five Elements dynamics that we can use systems such as Feng Shui, Bazi and Chinese oracles.

Intrigued by those notions? Then why don’t you contact me for your personalized Bazi analysis now and a Feng Shui consultation to take your life to the next level? I offer consultation in London, Paris, Berlin and internationally…