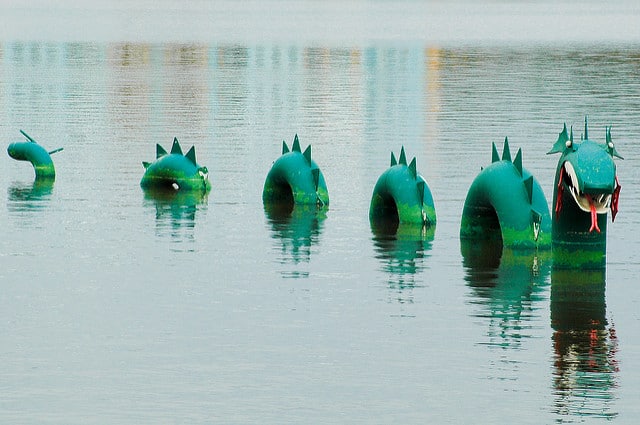 Welcome back to my Feng Shui & Bazi blog, with an article that apparently you like: a review of the last Chinese month and what happened in the world in regard to my Bazi predictions. Don’t forget that if you want to be kept up to date with my posts you can follow me on:

And so it was another eventful month where my predictions were verified week after week: something that you have seen with my updates on my Facebook pages. Let’s review what happened during the Yang Water Dragon month of April 2016 then, before we move to the Yin Water Snake month of May 2016. In italic you’ll find the excerpt of my predictions that were in this article: http://www.laurentlanglais.com/bazi/astrology-forecast-world-april-2016 The Water Dragon month of April 2016 was all about Water manifesting. Credits: http://www.flickr.com/photos/glasgows/

One major aspect this month was the scandal of the Panama Papers affecting several countries: the prime minister of Iceland for example resigned in regard to his involvement with fiscal evasion.

While I didn’t foresee it in my predictions, it is fascinating to see how it matches with the overflow of the Water Element of the Water Dragon month in Chinese astrology. First, because it’s a huge amount of information that was processed for years by journalists that is suddenly unleashed with torrential consequences and ripples effects. All images of a dam suddenly open and letting the Water flow. No country is untouched…There is no stopping this Water that started to flow on the first day of the Dragon month! But also because we are here talking about offshores business – another Water related image and travelling between countries = Water Element. Finally Panama is a country made famous for a huge diplomatic crisis around…Water (the Panama canal) in the 20th century and will now be also remembered for a second diplomatic crisis in the 21st century! I will one day look at the Feng Shui of Panama and how the man-made canal affected its history…

Landslide, flooding, earthquakes and tsunami are ALL likely!

Everything happened in term of the natural disasters that I was foreseen through Chinese astrology. The wet earth and the dampness brought a lot of instability in the ground. We have some major earthquakes all over the world.

A major 6.6 eartquake on the 10th of April in Afghanistan

Followed by one major 6.4 in Kumamoto, Japan:

The Japanese earthquake was actually followed my multiple others. Those brought the landslides that I was predicting:

Some theorise that those giant rifts and multiple earthquakes means that part of Japan is actually splitting apart due to the move of the tectonic plates!

That is not all! There was another major earthquake in Ecuador, a 7.8 after those ones: http://www.bbc.com/news/world-latin-america-36067380

As I am closing this article, ANOTHER major earthquake hit Vanuatu! The last week of the Dragon month could bring more…
http://www.dailymail.co.uk/news/article-3564587/Powerful-magnitude-7-0-earthquakes-strikes-Vanuatu-tsunami-warning-issued.html?ito=social-facebook

That Ecuador earthquake brought a Tsunami warning, as I also predicted….

We also had landslides in Northern Pakistan early on during the Dragon month:

As for the floods they were in England:

Stock market in trouble: the crash is more likely in May (Snake month) or September (Monkey month), but it is a close call…

Here, in all honesty, the stock Market resisted better than I was foreseeing. The Asian markets took a dive…
http://www.bbc.com/news/business-36069333

And so did the Dow Jones and Wall Street, but not in alarming proportions:

Intel announced a massice 12,000 jobs cut, but this is the main news that I see in this area:

Conservatism and fear taking over in some areas: bad solutions provided to the migrant crisis and wave of international terrorism.

Unfortunately, Europe showed an ugly side this month toward the migrants. The UK parliament decided to not take in 3000 Syrian orphans, despite the fact that the UK and Europe created the situation by bombarding Syria in the first place

In this area, the main news is actually Europe deciding to plan a military intervention in Libya. What a wonderful idea! More instability created in the Middle East….

As well as a boat full of refugees sinking during the Dragon month:

Military coup or operation that will likely backfire

This one was not totally fulfilled, as far as I can tell. In the last days of this Snake month, the tensions are escalating between Washington and Moscow in Syria and the truce in this country be short lived, which could actually means that this prediction manifests

The other related note is Hillary Clinton defending the Honduran coup of 2009:

Problems for aviation: some planes will suffer technical difficulties;

A bug or product recall for a big high-tech company;

Indeed! The Badlock bug, affecting Windows and Samba, is a major bug that was disclosed and fixed on the 12th of April 2016

Samsung was also in the process of fixing one of their bug this April month:

In this area, it is the blockbuster Batman V Superman which, after a huge start, sunk for finally not even reaching 1bn in worldwide box office – for a budget of 400 millions. The movie performed well below expectation in the long run.

Significant advance in women rights this month in different countries;

I am very happy that this prediction was fulfilled. First, with the decision in the US to remove the slave owner Andrew Jackson , a despicable president, from the $20 bill and to replace it by a black abolitionist woman Harriet Tubman . A significant advance in term of women and minority visibility in the US

Beyonce also surprised everyone by releasing her Lemonade album that is an ode to black women history, inspired by the Afro-American poetess Warsan Shire

Advance in psychology, psychiatry; out of the box treatments with possibly new molecules and/or psychedelics in regards to depression, the human mind overall;

That is another very precise prediction that I am very proud of, as this Dragon month of April 2016 saw the publication of a study of brain waves under LSD – re-opening the door to psychiatric treatment through micro-doses of psychedelics drugs:

As well as a new study allowed on medical marijuana for PTSD treatment in the US:

And a new treatment for Alzheimer patients:

And a new study on blood pressure difference linked to heart disease was also published during this month:

There was one invention released to clean marinas, but technically the news hit on the last day of the previous month:

Sea-levels rising made the news on the BBC

And a new Australian website was launched to show how see rising would affect one’s home!

Benefits for the transport industry (ouside of planes) such as boats, underwater tunnels etc.

This other predictions was fulfilled brilliantly with France signing two record contracts around maritime transports; one of €4.6bn for the construction of cruise ships

and another of €34bn for the construction of submarines for Australia.

Archaeological discoveries underwater or due to the earth moving

There were some major news around dinosaurs discoveries this month indeed.

The university of Reading showed that dinosaurs were in decline well before the famous meteorite impact:

A 13 millions yeas old crocodilian fossil was unearthed which brings new clues on a parallel evolution:

The tooth of a giant killer whale fossil discovered in Australia:

A study aiming at discovering what’s behind the sounds in the deep ocean:

And the geek that I am was happy to see a new Godzilla movie trailer arriving from Japan, liking dinosaurs, Dragon and the Water Element. A Water Dragon monster reappearing during the Water Dragon month, how timely is that?

Furthermore I’d like to finish with a panel on the astounding amount of news that were related to the Water Element this month, in all its form. The Yang Water Dragon month was ruled by an overflow of Water and there was not a single day without news relating to sea, water, ice, water animals etc! Judge by yourself:

The Loch Ness monster spotted in the Thames in London!
http://leadercall.com/2016/04/experts-stumped-by-monster-sea-creature-spotted-in-river/

A new study shows that our limbs have evolved from marine animals:

A new state of water molecule was also discovered during this month totally ruled by the Water Element! How often do we witness the discovery of a new state of water?!
http://phys.org/news/2016-04-state-molecule.html

A new coral reef discovered in the Amazon!
http://gizmodo.com/scientists-discover-enormous-reef-at-the-mouth-of-the-a-1772326348?utm_medium=sharefromsite&utm_source=Gizmodo_facebook

The exploration of Europa, ice moon of Jupiter, was scheduled by scientists: As you see, this month was ALL about the Water Element in Chinese metaphysics but also in the news! What is very interesting is that the new Yin Water Snake month is a mix of Water and Fire but that will act again as a mostly watery month. I now invite to discover my Bazi world predictions for May 2016.