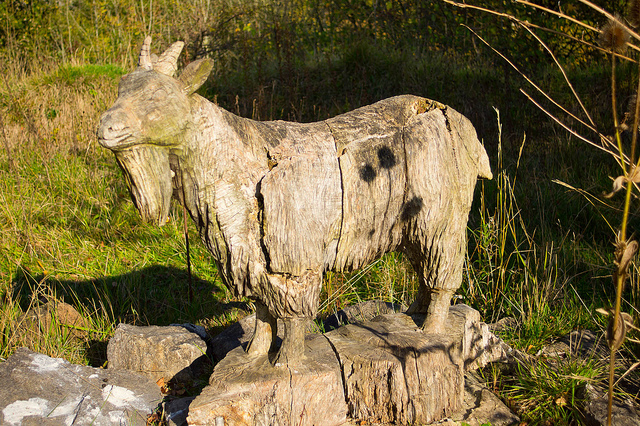 And here we are! This is this time of the year when we can look at the predictions in Chinese astrology for the New Year, based mostly on the Bazi (Four Pillars of destiny) system. Those of you who follow this blog regularly have read my monthly predictions and seen that the system is accurate, and you might remember my predictions from last year. For 2015, we are going to look at the energy of the year itself, and also at its “full chart” with the time the year starts, which is another method based on the Bazi.

As a reminder, this form of Chinese astrology is based on the interaction of a stem, on top, and a branch below. The stem is the celestial influence: it is made of one of the Five Elements in a Yin or Yang form (therefore, we have 10 stems). The branch is the terrestrial influence, or rather the expression on Earth of a celestial influence: it is made of different Elements. You know the branches as the 12 animals of the Chinese Zodiac: Goat, Dog, Rat, Rooster, Rabbit etc. So when you say that you are a “Wood Rooster’, a “Golden Dragon”, a “Fire Rat” and so on, you actually use the stem and branch system to speak about your year of birth – which is one of the Four Pillars only. Some argue that the branch has more influence than the stem, and it is not entirely wrong: rather, it has more “weight” on the overall chart. However, the interaction stem-branch and their harmony or tensions is what really matters. Let us not forget that we have 3 Lucks: Heaven, Human and Earth, and therefore all aspects must be considered.

So, a point of vocabulary first and foremost. Is this the year of the Green Sheep or the Wood Goat or something else? For the Element, it’s Wood – no doubt. The stem of the year is Yin Wood (Yi). The green color some use might be by association with the Wood Element, but it is incorrect to call the year green instead of Wood.

As for the sheep vs goat vs ram debate however, this is a bit more complicated – or actually quite simple. It would be a mistake to consider that the animal carries the Chi of the year by analogy between the animal personality, and the type of energy we talk about. This might have been through to a small extent when the 12 animals of the zodiac were chosen, but mostly they were chosen by the scholars of the time to give an easy, pictorial concept for the pupils to learn, and for the laymen to visualize the idea of the different Chi. So, while we can argue that the Horse that represents the Fire of the South has some degree of analogy (the Horse can kick and is tumultuous like Fire), the association of the Rat with Water and the North (rats notoriously hate water), or the Rooster with the Metal in the West, or the Rabbit with the Wood in the East, are mostly symbolic. I argue that those animals at the time were chosen to have an image, not because their characteristic exactly depicted the type of Chi of this time or location. Of course, as with every symbol, centuries of use solidifies the symbol with its interpretation; so now those animals also carry the energy they depict more strongly.

However, to finish on the matter of labeling, you shall also remember that translating Chinese characters into English often leads to a narrowing of a greater meaning: lost in translation is indeed real. Therefore, we can use Sheep, Goat or Ram for this particular Chi of 2015 (that is also the Southwest 1 sector). It doesn’t really matter. None of these words might absolutely translate the Chinese character, and they are only a symbol of the energy – not a real depiction through the animal behavior…I hope that clarifies the matter. For myself I choose Goat because…I love goats!

If you remember last year’s article, one way to see what the year of the Yin Wood Goat will bring to us is to look back at the events of the previous Yin Wood Goat year. The same type of Chi comes back every 60 years, and therefore we shall look at 1955.

Overall, in term of worldwide event, it was rather uneventful: we have to discard retirement of powerful individuals (such as Winston Churchill) or death of famous ones (such as James Dean) as those have more to do with their personal Bazi. In term of global events however, here is what we could see:

So, overall: more anger and conflicts in the East and Southeast, and more equality in Western Democracies in 1955.

In term of natural disasters, 1955 saw some major earthquakes, most notable in Egypt, Australia (Gabalon) and the most lethal in China (Yuzha). There was also several hurricanes and typhoon, one of the worst flood in the state of Connecticut which was actually a consequence of the hurricanes. Finally a heat wave and drastic drought hit the UK – which was actually worse than the well-known 1976 drought. Who said that the UK is rainy?

Now that we have seen what 1955 brought overall, we shall understand why this type of Chi is linked to such events and what can be expected for 2015.

What is the Chi of this New Year? It is the Yin Wood growing on the Goat, Yin Earth. First and foremost, we can notice that the Chi is overly Yin, while 2014, year of the Yang Wood Horse, was all Yang. In term of polarity, that means that the year of the Wood Goat will be more inward, less expansive, slower and more gentle than the hectic, frenetic and at times confusing year of the Yang Wood Horse. After the explosive energy of the Horse and the excess of Fire, we have a much softer Wood/Earth combination, and a more static year. Wood and Earth are actually the two most benevolent Elements out of the Five. Not that it is actually accurate to put moral aspects to the Elements Chi, but they are both the slowest, and more nurturing Elements. The Yin Earth is akin to mother Earth, the soil that nourishes us; and the Yin Wood is like the young sprouts, the delicates plants and flowers that start to grow in springtime. That brings the logical conclusion that the dominant Elements of 2015 are Wood and Earth. The Earth dominates – as it rules the branch – but it is partly kept in control by the Wood in 2015. So, it doesn’t become overwhelming…And the relation works both ways: the Wood is still here and grows, but as the Goat is the storage of Wood, it expansion is under control and not all over the place. Both Elements are dominant, and both Elements are kept in control by the other. Finally, we shall notice that the Earth is known as the wealth Element of the Wood: as Wood controls the Earth in the cycle of the Five phases. So for the Wood to be seen on top of an Earth branch is rather auspicious – it means the Wood “sees” its wealth, and this is a symbol of relative prosperity for the year but furthermore for people and industries who favors the Wood.

So in term of the Five Elements, we have:

We shall see what it means for the signs of the Chinese zodiac and the Bazi later on. If you want to know what 2015, year of the Wood Goat, Sheep, or Ram has in store for you, don’t forget to order your Bazi chart and report now. This is also the idea time to do a Feng Shui consultation for your home or business. To prepare for the change of Chi, if offer you 10% off my services until the Chinese New Year celebrations on the 19th of February 2015! So what are you waiting for?